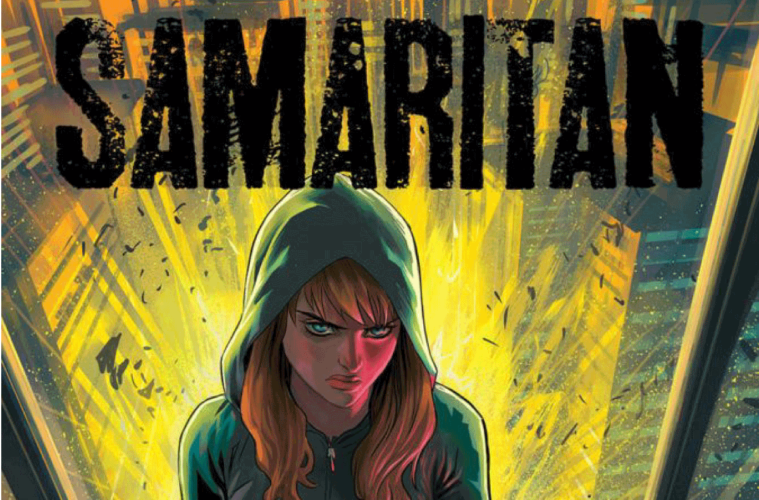 The modern world is a dangerous, complicated place. State-of-the-art surveillance can track individuals from anywhere in the world. Televangelists heading up megachurches line their own pockets with tax-free tithes from congregations looking for salvation through modern sales of indulgence. Samantha, the protagonist of Matt Hawkins’ politically charged Top Cow titles EDEN’S FALL and THE TITHE, learns just how deadly all that can be when she finds herself directly in the crosshairs of the American government in the EDEN’S FALL follow-up, SAMARITAN: VERITAS.

Hawkins re-teams with superstar artist Atilio Rojo for SAMARITAN: VERITAS. The duo previously combined the characters and plotlines from Top Cow’s provocative titles THINK TANK, THE TITHE, and POSTAL into EDEN’S FALL. After the events of EDEN’S FALL, Samantha decides to quietly live under the radar abroad while Dwayne Campbell, her former colleague, continues to work for the FBI. Both characters are haunted by the losses they endured. The events of EDEN’S FALL have led to Samantha’s nemesis, Senator McKitrick, becoming President of the United States. Seeking to avenge those she’s lost, Samantha, former member of the elite heist squad Samaritan, decides to take the fight to the new commander in chief any way she can while avoiding the full might of the American intelligence community around the world.

SAMARITAN: VERITAS explores the fallout of EDEN’S FALL in a big way—the culmination of all the Top Cow political thrillers from writers Matt Hawkins and Bryan Hill. At the same time, Hawkins and Rojo have made SAMARITAN: VERITAS a fresh, accessible starting point for neophyte readers looking to jump in on the action. The characters and their respective relationships are certainly present and built upon, but the creative team keeps the story from becoming convoluted and mired in prohibitively dense continuity. For longtime readers of THINK TANK or THE TITHE, however, there is plenty of narrative payoff in seeing how these characters have developed in the wake of the events of EDEN’S FALL. Plotlines deepen, the stakes raise exponentially, and the game changes irrevocably.

Here, Atilio Rojo makes the characters his own. He fully embraces the globe-trotting spirit of SAMARITAN: VERITAS, lushly illustrating everything from exotic locales to the cold, clinical backrooms of federal government. It is a tough balancing act to continue the spirit of artists and stories past while creating something new, but Rojo excels at both here.

A frighteningly timely political thriller that showcases the dangers of executive overreach and wolves running the highest levels of the federal government, SAMARITAN: VERITAS captures all the best elements of the previous political thrillers by Matt Hawkins while moving the characters and story ahead by bold leaps and bounds. As EDEN’S FALL proved, nothing and nobody is safe, and the stakes are higher here than they’ve ever been before. Whether you’ve been following these characters for years or are looking for a fresh jumping-on point, SAMARITAN: VERITAS is a crackling good read with a very clear mission statement: Survive. Evade. Resist.

MATT HAWKINS: Samaritan has gone to France to essentially live in exile off the grid. She’s kind of done, retired, and mourning the loss of her boyfriend Jimmy, who died in EDEN’S FALL. She overhears a couple French people discussing how Senator McKitrick (the architect of Jimmy’s death and the events in the second volume of THE TITHE) has been elected President of the United States. This is too much for her to take, so she comes out of retirement with a plan to take him down.

Dwayne Campbell has been sanctioned, but is still an active agent at the FBI. He wants to help Samaritan, but is now aware that the only real way to save her from being taken out by the United States government is by capturing her first. He joins Mirra Sway in an effort to find her and bring her in alive before the various intelligence agencies and assassins do.

This arc is a high-stakes chess match between Samaritan, Northlock Industries (a military industrial contractor), Dwayne & Mirra, and the US government. Samaritan realizes it’s something of a suicide mission, but has a plan to bring McKitrick down.

STONE: Atilio, these characters have come a long way since the days of THINK TANK and THE TITHE. How do you capture this progression visually?

ATILIO ROJO: I got a little lucky here, because the artists who did the original designs did a good job. All the characters are clearly designed, so I only have to take them all and “say them in my own words,” draw them in my own style, while always respecting the original idea. In addition, the scripts for THE TITHE, THINK TANK, and POSTAL really help me to define the personality of the cast, but in terms of the emotional spectrum. That’s really cool to me. I really enjoy the acting of these characters.

STONE: With SAMARITAN: VERITAS, the scope of the story has extended beyond borders. How has been writing and visualizing such an epic expansion been?

HAWKINS: It’s fun to set the stories in foreign locations that most Americans are really unaware of. I pick a lot of settings and landmarks and use those as part of the scenes. I’ve been doing that in THINK TANK for awhile now. It’s fun and gives me a reason to research locations. I set the opening in Pakistan because the US alliance with that country is so bizarre and tentative that it makes for good drama and tension.

STONE: The Top Cow political thrillers have always had shades of the modern world. How have current events informed SAMARITAN: VERITAS?

HAWKINS: Senator McKitrick, soon to be President McKitrick, is an ideologue and a religious maverick who now has command of the White House and all its military and intelligence assets. I wrote the outline to this before Donald Trump won the election, but while he was in the running for the Republican nomination. The left looks at Trump as dangerous, but McKitrick is a bad man hiding under the guise of religious one. He’s really dangerous because he actually BELIEVES what he’s saying. I like a good bad guy, and I was able to sneak “alternative facts” into the dialogue of both this arc and THINK TANK, so I’m having some fun with it. I look at McKitrick more as a televangelist who shifted into politics…which fits the overall theme of THE TITHE anyway.

SAMARITAN: VERITAS #1 debuts 5/24 and is available for preorder now.

Sam Stone is a columnist and translator for Image Comics living in the D.C.-area. He is one of the foremost experts on the work of Shigeru Miyamoto. You can follow him on Twitter and Instagram @samstoneshow. IMAGE+ is an award-winning monthly comics magazine that’s packed with interviews, essays, and features about all your favorite Image comics and your first look at upcoming releases.

This feature by Sam Stone was originally published in IMAGE+ #11.