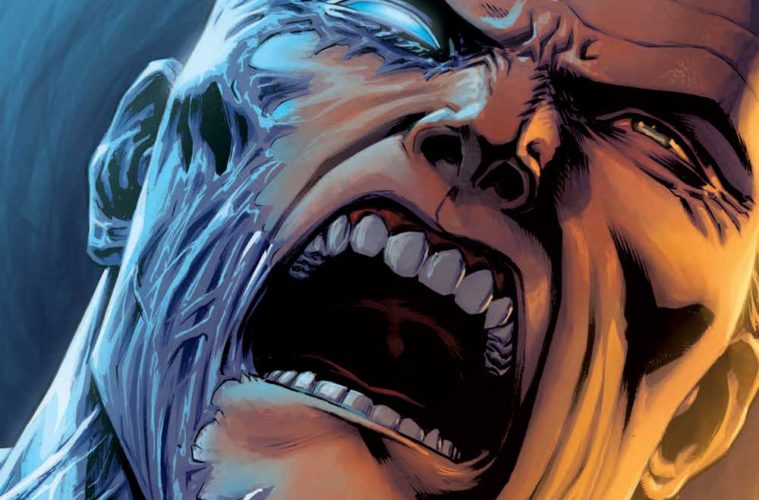 The Past, Present, & Future of CYBER FORCE

This feature by Brittany Matter was originally published in IMAGE+ magazine.

Have you been holding out for a cybernetic hero, or maybe…you’ve been missing your favorite characters from Marc Silvestri? Either way, CYBER FORCE is back and will save the day in this brand-new story from a well-seasoned team. Matt Hawkins, Bryan Edward Hill, & Atilio Rojo share some of the behind-the-scenes work they’ve been brewing for Top Cow’s original hit, and their take pulls no punches.

BRITTANY MATTER: Matt, is this a continuation, an origin story, or a reimagining of CYBER FORCE altogether?

MATT HAWKINS: It is a combination of a continuation and an origin story. Not to give too much away, but in the second volume of IXth GENERATION, Aphrodite IX killed someone in the past that altered the time stream. This allows us to do a fresh story that’s both in continuity and a new origin. Ultimately, if you’re reading this for the first time, it’s fine, and you don’t need to have read anything prior to this to fully get everything.

I remember the first meeting Marc and I had to discuss CYBER FORCE returning for the 20th anniversary of Top Cow. We updated the team and its look. Rojo has done some further design work off of Silvestri’s designs that gives this an even fresher feel.

BRITTANY: What were the most memorable moments from that or other CYBER FORCE meetings with Marc? Do you have a name for those meetings?

MATT: We (pretty boringly) call them story meetings. Seems as two creative types we should be able to come up with something better than that! Marc is very passionate about CYBER FORCE. It’s an important property to him, and it’s important that it’s treated properly. I think for CYBER FORCE: REBIRTH, I was able to convince him to get rid of some of the characters I thought were kind of lame [laughs]. The team is more focused on the family dynamic now. 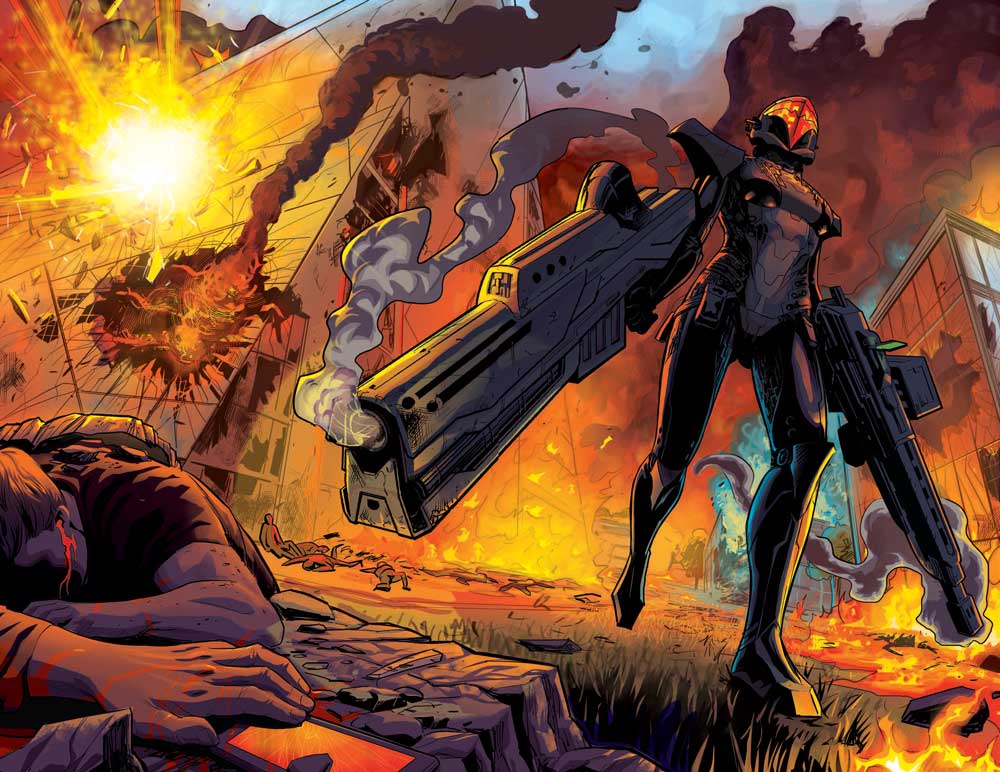 BRITTANY: What are you most excited about in this encore?

MATT: This is the first CYBER FORCE storyline to be fully planned 25 issues in advance. We’ve got a long story arc planned, and one of the reasons we went with Atilio Rojo is he’s so fast! With POSTAL coming to an end, it seemed a good time to launch a new planned long-arcing series. For the story itself, I love the idea that technology makes us less human. Playing with that dynamic is always fun, and it’s front and center in this storyline.

BRITTANY: Atilio, this first issue is nicely balanced between exciting action scenes and slower-paced emotional beats. What do you think makes a good action scene? How do you know when you’ve nailed an emotional moment?

ATILIO ROJO: An action scene needs some powerful, dynamic images and a good narrative that’s well choreographed to give emotion/meaning to the action, plus some intense colors in the strongest moments, the emotional moments. I see them the same as the action scenes but without choreography [laughs]. The most important thing here is to try to make the audience feel the same as the character, and I do, or try to do that, especially by way of facial expressions and body language. I have had a lot of practice with emotional stories, and I enjoy depicting those scenes.

BRITTANY: The colors are remarkable as well. What feeling do you want the readers to get from your colors?

ATILIO: With color, I try to get the readers into the story, to see the image as real. Although my style is not completely realistic, I try to create color palettes according to the emotions of each moment, and appropriate lighting, whether it is an action scene or the more emotional moments. 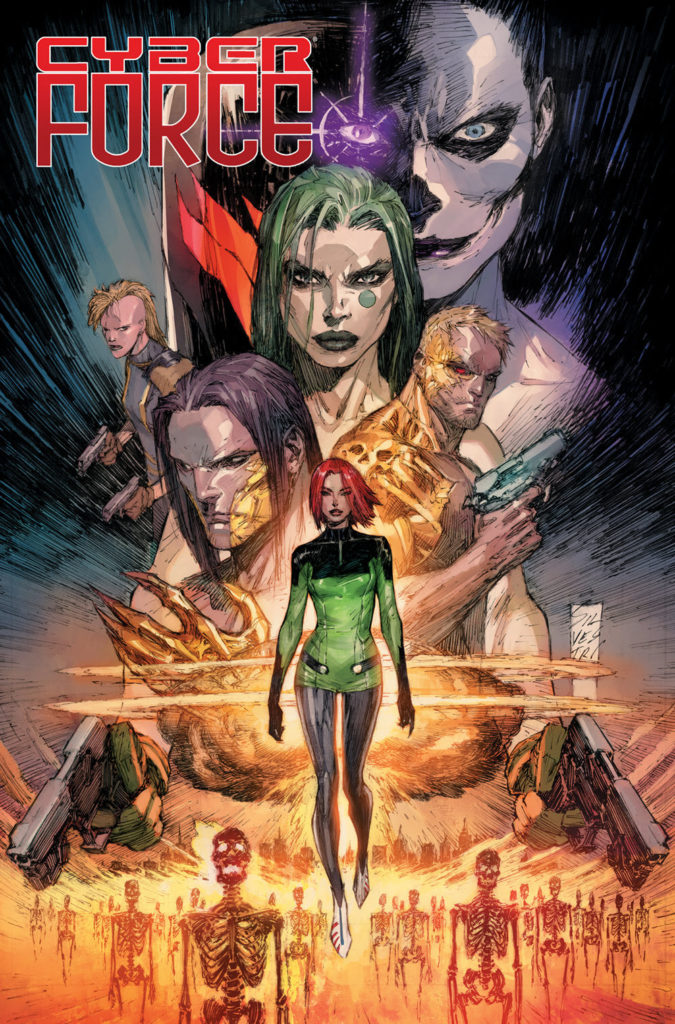 BRITTANY: You’ve been co-writing CYBER FORCE since 2012 with Marc Silvestri, so your familiarity with the characters is intimate. Where are the heroes in their journey this time?

MATT: At its core, CYBER FORCE is about Stryker’s family and the relationship between technology and the military. We’ll be seeing all the classic heroes like Ripclaw, Stryker, Velocity, Ballistic, and Aphrodite V.

2018 is a return to Top Cow basics with the WITCHBLADE launch in December 2017, CYBER FORCE in March, APHRODITE V in July, and THE DARKNESS in October.

BRITTANY: How’s your knowledge of cybernetics?

BRYAN EDWARD HILL: I’ve been studying the societal ramifications of transhumanism for a while. I’m more interested in the effect of the technology on society than I am the details of the technology. Cyborgs are already here. It’s been a world of pacemakers for a while.

From a certain point of view, you could consider social media a kind of cybernetic extension of the mind, like a collective hive mind we all join by compulsion. We have a near-organic relationship to our phones. They provide endorphins. They’re fully integrated into our behavior.

Note: I’m not saying that any of this is a good thing.

BRITTANY: Are you following the rules of the previous series, or was there some freedom in reimagining the future of human-cyborg technology?

BRYAN: I’m certainly keeping the “high-octane spirit” of the original series, sure. I didn’t want to reshape it into something static. Classic Top Cow comics have always been very kinetic, and that’s a form I’m following.

Whenever you’re writing about theoretical technology, you have to to make adjustments for the era you’re in. When CYBER FORCE was created, there weren’t smartphones. We didn’t have Elon Musk. The world has advanced since the inception of that concept, so I have to consider all of that while writing.

Ultimately, CYBER FORCE was about the definition and preservation of humanity as we evolve through technology. That core issue is as relevant as ever, so even while I’m adjusting things, I’m building on the foundation of what Marc created.

BRITTANY: Bryan, you straddle a few sometimes-related industries, having worked not only in comics but in screenplays and video game adaptations as well. Has this unique position contributed to your work in general and in CYBER FORCE? What keeps you coming back to comics?

BRYAN: Storytelling is a life practice, and I approach it in a syncretic way. I pull from all forms and traditions, writing things across the spectrum. In esoteric terms, I’m a “chaos magician” of storytelling.

What keeps me coming back? Hmmm. To be frank, it’s the fans and readers. I loved comics growing up, and to be able to create stories for people who share that love is a great experience.

I enjoy it. The moment I stop enjoying it, I’ll stop doing it. That’s my approach to life, in general.

BRITTANY: CYBER FORCE is a jewel in Top Cow’s crown, for sure. How do you feel about working on this iconic title? Is there a lot of pressure?

ATILIO: A lot of pressure…a lot! I think a lot of fans are waiting for Marc, and they will have to settle for my drawings! I expect a certain level of hard criticism towards me, but it’s normal. I’m also a fan of Marc and this series in particular, so this is both a great pleasure and a dream come true. At the same time, I feel pressured by my own expectations and not only those of the public.

BRITTANY: What are you most looking forward to showing the readers with this new story? Are there any new techniques you’re excited to show off?

ATILIO: A lot of excitement and action, as well as a redesign of the characters! From what I’ve read from the script, I’m also excited about introducing another way to introduce the series. Time has passed, and some things that were wonderful in the ’90s, today would not work as well, so we’ll show fans a nice mix of new and old things.

BRITTANY: Atilio, which character are you most excited about drawing?

ATILIO: A couple of them! I’ve been fortunate enough to draw Velocity as an adult on IXTH GENERATION, and now as a teenager, which has been a pleasure. But I’m waiting to draw Ripclaw, who is definitely my favorite.