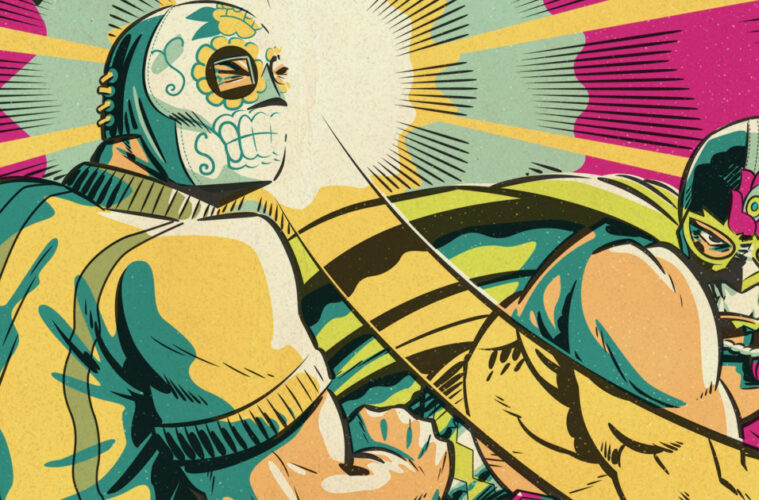 After years of independent release and a victorious Kickstarter campaign, La Mano del Destino sets its sights on the direct market.

Los Angeles, CA. March 23, 2021 — Top Cow Productions and Image Comics will be publishing the collected edition of the indie, Lucha Libre comic La Mano del Destino this May. This comic has been a passion project of J. Gonzo’s for nearly a decade. Gonzo sought out a strong Tag Team partner to bring his creation to the direct market and, given their rich history of diverse projects and creators, found one in Top Cow.

“When Gonzo told me he was doing this book I had no idea what to expect, it was a world I was completely unfamiliar with,” says Top Cow President Matt Hawkins. “Then I read it, laughed, and fell in love with these colorful characters. I’m glad we picked this one up.”

“Top Cow is a place where creative ideas win,” said Gonzo. “If you look at their current projects, or even their back catalogue, there is a rich variety of story types and approaches that is unlike most other publishers or studios. They are less interested in a homogeneity of some house style and truly promote the best, creative ideas. It really is an ‘artist’s company,’” Gonzo said. J. Gonzo previously performed art duties with writer Henry Barajas on ALA GNRT’s Top Graphic Novel for Adults of 2020 Reading List non-fiction series La Voz de M.A.Y.O.: Tata Rambo.

La Mano del Destino tells the tale of a once-champion Luchador – who, after being betrayed by his friends and unmasked in the ring, agrees to a Faustian bargain with a mysterious promoter. He gains a new power and the identity of La Mano del Destino in order to exact revenge upon his betrayers. But, like all good Comicbook bargains, La Mano del Destino quickly finds that there are complications to his bargain. Set in a swanky, 1960s Mexico where Lucha Libre is intrinsically woven into all aspects of society and the most important events that happen within this world. This story winds its way through the machinations and motivations of all types who inhabit this unique setting. Can La Mano del Destino get his revenge while remaining the champion he knows himself to be? – Find out in this trade paperback.

“I fell in love with the work of Gonzo though his masterpiece La Mano del Destino when I saw it screaming out to me from an artist’s alley table. It seemed to satisfy a longing I didn’t even know I had for a comic that straddled the worlds of Lucha Libre, weird fiction, and Kirby-inspired graphics, all wrapped up in a dazzling, but still gloriously DIY, production design. Bottom line, when I see Gonzo attached to something, I know it’s got the real heart of indie comics beating at its core, and who can resist that beat?” -Phil Hester, FIREBREATHER, FAMILY TREE

La Mano del Destino is a 240+ page trade paperback created, written, and drawn by J. Gonzo. This edition recollects the original six-issues, contains a foreword by Evan Dorkin, and has over 40 pages of bonus and “making-of” materials. La Mano del Destino is available to order now through Previews (MAR210103) and will be at local comic shops on May 19th and May 25th, 2021 at bookstores.

J. Gonzo is a Chicano artist, born and raised in Cypress, CA., who resides in Phoenix, AZ. Artwise, his formative years were shaped by the rigid tradition and Byzantine iconography of the Catholic school he attended juxtaposed with the DIY aesthetic of the late 70s, Orange County Punk counterculture peppered with the bright, bold, Latino hues of his grandparent’s generation. He attended the Orange County High School of the Visual Arts Program and went to a terrible trade school for a degree in Graphic Design. He also apprenticed and tattooed professionally for a number of years before entering the world of advertising and design. Gonzo has spent the past 25-plus years using his creative skills at ad agencies, toy and comic companies, design studios, freelancing, creating his own comic book title La Mano del Destino and publishing imprint Castle & Key Publications, as well as handling art duties on La Voz de MAYO: Tata Rambo for Top Cow & Image Comics.